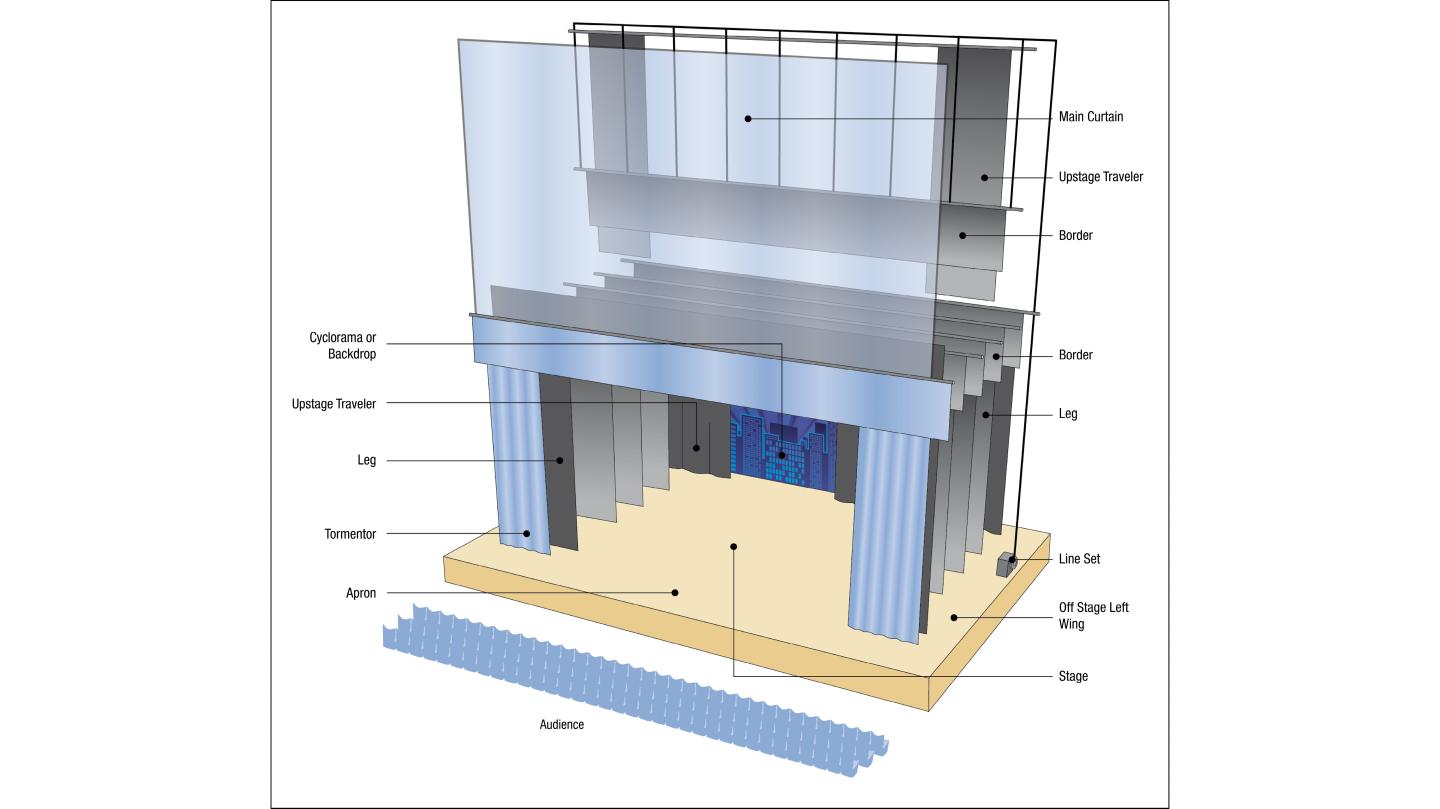 The Main Curtain has many names, such as House Curtain, Main Drape, Main Rag, Grand Curtain, and Act Curtain. All of these names usually correspond to the curtain that is the furthest downstage and can occupy the entire proscenium arch. The curtain is typically made from an FR or IFR velour  It is also usually more opulent than its upstage counterparts, sometimes it is simply a different color than the upstage drapes but many larger theaters and opera houses require more ornate fringes and trims to dazzle their audiences. Since these curtains are all the way downstage they are required to open in some way so the performance can take place. The different type of openings can be seen here.

Used to visually hide the offstage areas of the stage and are typically made from FR or IFR velour. Alternatively, Commando Cloth can be used as an economic option. These drapes are usually made of black fabric so they can disappear into the playing space.

Used to visually hide lighting pipes and tops of other drapery/scenic pipes and are typically made from FR or IFR velour. Alternatively, Commando Cloth can be used as an economic option. These drapes are usually made of black fabric so they can disappear into the playing space.

This type of curtain proves very useful on stage in both the mid-stage and up-stage positions. In the mid-stage position, it allows the stage depth to be reduced as well as allow scene changes to happen up-stage of it. The up-stage traveler allows for a black surround as well as visually hide a cyclorama or screen. It is typically made from FR or IFR velour. Alternatively, Commando Cloth can be used as an economic option. These curtains are typically not meant to be seen like the Main Curtain and are usually made of black fabric so they can disappear into the playing space.

Scrims are open-weave fabrics, typically spanning the entire width of the stage that plays an important part in the magic of the theatre. Usually made from seamless Sharkstooh Scrim or Bobbinet fabrics, these soft goods can change their perceived opacity by simply changing a lighting cue. When lit from the front, these drops create a solid wall of fabric, when lit from behind, the scrim becomes transparent, showing the scene taking place behind. These can be used almost anywhere on stage, downstage it can give a ghostly effect to an entire scene and upstage it can hide a backdrop or cyclorama when not lit.

Also known as a "Cyc". It is an upstage drapery typically made from FR or IFR seamless muslin, Leno filled scrim or PVC projection screen material that provides a large canvas ready for lighting effects. These are sometimes used in conjunction with a bounce, which is another large, typically white drop that goes behind the cyc, for lights to bounce off of to further diffuse the light.